The economic impact of transportation infrastructure is generally accepted in theory, where it is explained that transportation investment has a strong and positive influence on economic output at the national or state level. In 2015-2019, The Indonesian government was intensively implementing the construction of toll road infrastructure in various regions, one of them was the Trans Java toll road. After the operation of the Trans Java toll road, the area located in the Java coast line suffered different changes in economic activity. The purpose of this study is to describe the development of the area in the economic aspect compared to the conditions before and after the operation of the toll road and identify the factors that influence the development of the region after the operation of the toll road. This research was conducted using a case study method. The results of the study show that toll road construction is a blessing for some areas which is the destination movement, whereas in areas that are not a destination for movement tend to be less benefited by the decreasing in economic activity after the operation of the toll road. This study also found that toll roads have an effect on increasing local tax revenues and the number of trucks that did not use toll roads due to high toll costs. Factors that influence regional development after the operation of toll roads include: (1) completeness of regional facilities; (2) tourist locations; (3) geographical location. 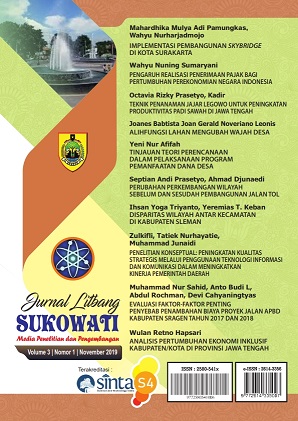